What are the different levels of editing? 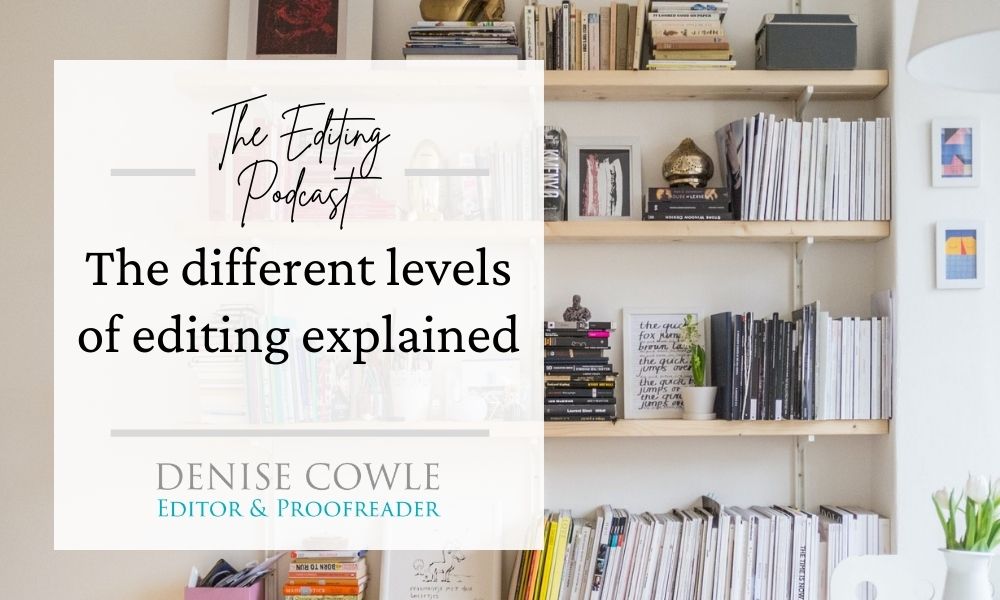 In this episode of The Editing Podcast, Louise and I discuss the different levels of editing, why editing is worth doing, the order of play, and how perfection is impossible in one pass.

Does my book need editing?

Whether you’re an indie author who’s going to be self-publishing or you have a contract with a publisher, your book’s going to go through various stages of … let’s call it constructive interference.
And that applies whether you’re doing the work yourself, or a professional editor’s on the case. Because the fact is, every piece of writing needs editing. And the key thing to be aware of is that editing isn’t a catch-all activity that can take a book from patchy to perfect in one pass. Each of the stages requires a deep and specialist focus.
Let’s look first at why editing’s worth the bother, because I think that can be really helpful when you’re deciding what kind of editing is right for you.
Related content: Why your business needs an editor

Do I need to edit my book?

It’s worth looking at the mainstream publishing industry because it certainly knows a thing or two about bringing high-quality books to market. And so it should – it’s been doing it for ever!
Publishers take their books through multiple rounds of editing, and the indie author who tries to mimic that process is the one who’s least likely to get negative reviews, and the most likely to build fans.

What is developmental editing?

This level of editing is called different things – story editing, developmental editing, structural editing – and it can be thought of as a shaping stage. In fiction, it’s where things like plot, characterisation, narration and pacing decisions are made.
And when a story has a good shape, the reader will feel satisfied when they come to the end of the book. They’ll have been taught what they sought to learn. They’ll understand a character’s motivations, who or what was blocking them and how those obstacles were resolved. They’ll know why this or that happened, who was responsible and why. But the journey might be bumpy; there will be peaks and troughs where there’s action, contemplation and deduction.
In fiction, another key point is that someone is telling that story. It could be an external narrator, or one or more of the characters. Getting that narrative viewpoint right will help the reader immerse themselves in the story. And this all needs to be structured and paced so that it engages the reader as the story unfolds.
Much of this also applies to non-fiction. Even non-fiction tells a story, taking the reader on a journey that has a beginning, a middle and an end. And if that structure isn’t right, the book won’t fulfil its promises.

What are fiction manuscript critiques?

A fiction manuscript critique is a type of mini developmental edit that look at the big-picture stuff like plot, pace, characters and voice. The editor reviews the book and creates a report –  they’re not changing anything in the novel’s file, which they would be with a full structural edit. The critique is an evaluation, and it discusses what the author can do to improve the book. The report levels vary depending on what the editor finds, but my colleague Sophie Playle’s reports are around 10 to 15 pages of A4, so they’re pretty detailed.

What is line editing?

Line editing is like a smoothing stage, where we check sense and flow. Every sentence should say what it needs to say, and only that. Too many words, or repetition of what’s already known, can make the reading experience really boring and frustrating. And that’s something that applies just as much to non-fiction writing.
Punctuation comes into play here too, especially in fiction. It’s not just about grammar, and it’s certainly not about pedantry. It’s a powerful pacing tool that can evoke tension as well as bringing clarity to sentences. Plus, in fiction, authors can play with sentence length and language style to reflect the historical period, genre, and the mood of a given scene. So line editing pays attention to that too. You don’t want your Victorian character talking about picking up the kids from school, or saying ‘awesome’ … well, not like people say it now!

Copyediting is the correcting stage, where inconsistent or incorrect spelling, grammar and punctuation are attended to, and where logic is checked so that readers don’t get distracted.

Can you combine line editing and copy-editing?

Doing line editing at the same stage as copyediting can be a good fit within fiction editing.But what about non-fiction?
Although I tend to refer to what I do as copyediting, for me that encompasses the elements of line editing and copyediting, and I actually find it hard to separate out the two! I find that I instinctively do both at the same stage, and as many of my clients generally aren’t aware of these definitions – they just want ‘editing’ – it’s more helpful for us to discuss what it is I can do for them than what it’s called!

Copyeditor’s style sheets really are the author’s and editor’s friend! They record decisions on the language choice (e.g. American or British English), style (e.g. -ise or -ize spellings, both of which are standard in British English), proper-noun spelling, character traits, location identifiers, the book’s timeline, use of idiom, dialogue treatment, how numbers are rendered, how capitalisation and hyphenation are handled, and a hundred other decisions.

Proofreading is the quality-control stage, where any final literal errors and layout problems are flagged up. Now, it’s rare for a book to get to the prepublication stage without a few mistakes remaining. We’re all human. Even editors are human!
Sometimes errors get introduced during previous rounds of editing, or the design process causes problems. And some elements of the book – like a heading, a paragraph or a footnote – might be formatted inconsistently and incorrectly. Think about indents, line spaces, end-of-line word breaks, page-number chronology, running heads and alignment just for starters!
Related content: Do I need a proofreader or a copy editor?

What’s the correct order for the different levels of editing?

Shall we look now at the order of play? Because there is a logical order when it comes to editing. I think it’s kind of like building a house.
And when you swap the order around you can end up in a pickle. Let’s imagine you do line and copyediting. So you smooth the prose and eradicate most of the spelling, grammar, punctuation and consistency problems.And then you discover a gaping plot hole that requires you to move two chapters, rewrite three, and make 75 sentence-level tweaks throughout the rest of the book. That’s all structural stuff, and every move, every deletion, every rewrite, every tweak brings with it the chance of damaging the line/copyediting work that’s already been done.
And that’s just a load of time and money down the drain. So, let’s do a quick overview of the key points.

How to plan your editing logically

Plan your editing logically, starting with the big picture and moving to more micro levels.
1. Do your developmental or structural editing. That’s the shaping stage where you do the macro or story-level stuff.
2. Follow that up with the smoothing and correcting stages of line and copyediting. Here you’re working at sentence level.
3. Then close off with your final quality control – the proofreading stage.
And don’t try to do everything at once! And please don’t ask an editor to do it all at once either. You really need to make time for several different passes.

So there’s just one more thing. We thought that we’d wrap up with a regular section called Editing Bites, handy resources that we both love, and every week we’re going to offer you one each.
Louise is going to give you two this week, because one is just a free booklet that she’s put together and it covers everything we’ve talked about in this episode. It’s called Which level of editing do you need? and it focuses on how to choose editing based on the outcomes you want to achieve.
And Louise’s second Bite is Self-Editing for Fiction Writers: How to Edit Yourself into Print, a book by Renni Browne and Dave King. This is a really great resource, almost a tutorial, for big-picture work, especially if you want to make your book more attractive to an agent.
My Editing Bite is actually a blog article by Joanna Penn, on her webite The Creative Penn, and the article is called  ‘Self-editing a non-fiction book’. In that article she outline her own self-editing process, and I think it’s always helpful to see how others approach a particular task, even if we don’t follow their method exactly. And the blog’s actually an extract from her book, called How to Write Non-Fiction: Turn Your Knowledge into Words.