7 spelling errors and how to fix them 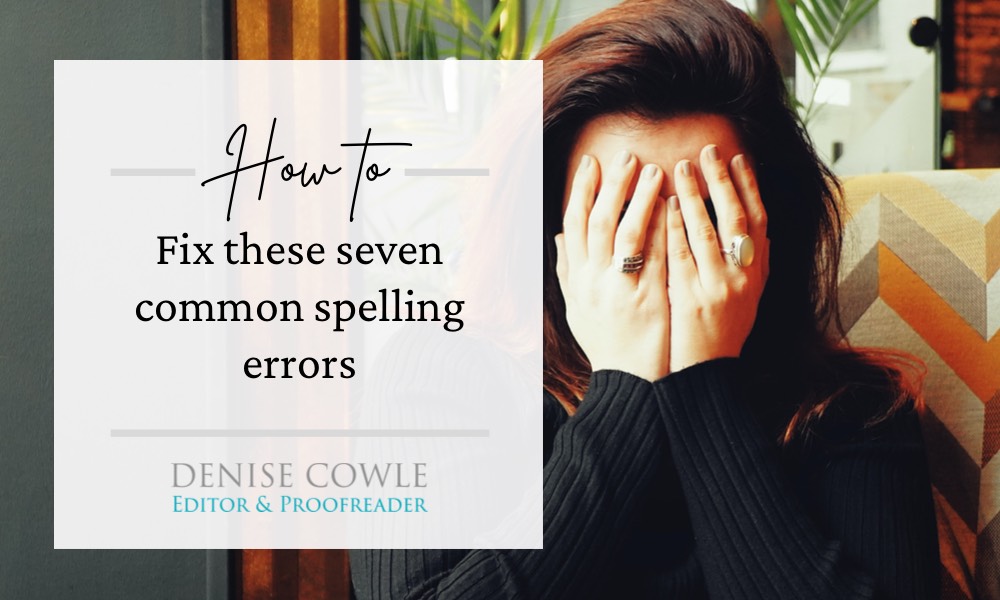 We’ve all seen them, and we’ve all made them. Spelling mistakes that you only notice once you’ve printed 1,000 copies of your brochure, or that you don’t notice until someone calls you out on social media (shame on them – the polite thing to do is send a private message).
Here are seven of the most common mistakes I see when I’m editing marketing copy, web pages and blog posts. I explain why they are wrong and give you tips on how to remember the correct spelling or usage.
Ready? Let’s dive in!

I see this everywhere – it’s very, very common. And it’s an easy mistake to make because these words sound so similar when we speak.
According to Fowler’s Dictionary of Modern English Usage, even Queen Elizabeth I made this mistake in a letter – so you’re in good company!
Accept means to agree to take something – a gift, a compliment.
I should never accept a third cocktail  – it leads to disaster!
Except shows that someone or something is excluded.
I have every book in the series except the last one.
TIP: Think of the ex in except and exclude meaning ‘out’ or ‘not part of something’.

These words have only one letter of difference, so it’s very easy to confuse them.
However, that difference can help you to remember which one to use.
The only time you should use stationery is when you’re talking about  office supplies: writing paper, envelopes and notebooks.
This gift shop sells lovely hand-made stationery.
Stationary means not moving. Like when you’re in a traffic jam.
We’ve been stationary on the M8 for the last 30 minutes.

TIP: Think of  the e in envelope and the a in traffic jam.

I wonder how much of a part auto-correct plays in this one?
Although I’ve yet to hear anyone say defiantly instead of definitely, I’m increasingly seeing it written.
Defiantly means to do something in a way that shows resistance or disobedience.
The seagull looked at him defiantly as it refused to move off the road.
Definitely means ‘without doubt’.
I’ll definitely be there at 7 am sharp tomorrow!
TIP: Think about whether you’re being disobedient or certain about the thing that you’re doing.

Another very common mistake is to confuse when to join these two words and when to keep them separate.
I see this one a lot. (Not alot – we’ll talk about that in a minute!)
If you want someone to join in with something you’ve organised you’d like them to be a part of it – one part of the whole event.
Come and be a part of our community choir!
But if you need to keep two things away from each other, they need to be kept apart. Separated.  It can also refer to an exception.
We keep our cats and dogs apart as they don’t get on.I go to the gym every day apart from Saturday.
Do you see where the problem could come from? When we mean to join in with something, you actually use the separated form – be A PART of something.
And when we mean to keep things separated, you use the joined words – keep two people APART.
TIP: Think opposites and you’ll remember this one!

5. EVERYDAY or EVERY DAY?

Everyday is an adjective, which is a word that describes a noun. It tells you that something is usual, not out of the ordinary.
For many men, shaving is an everyday activity.
Every day describes how often something happens. It means on each of the days: not  on one day or on two days, but on each (or every) day.
I post on my social media accounts every day.
TIP: Think about whether you want to describe something as ordinary, or explain that something happens each day.

This one is quite straightforward. There is no such word as alot.
Always write it as two words. A LOT.

7 ALL RIGHT or ALRIGHT?

This is another case that technically  should be straightforward.
Alright isn’t actually a word.
If you want to be absolutely correct, you should use all right to indicate that everything is fine, but I think the ship has pretty much sailed on this one.
I think it’s alright to use alright in most situations. The exception is, I think, in very formal or academic writing, where it’s probably better to stick with all right. And Fowler’s Dictionary of Modern English Usage agrees with me!
So there you have it – seven common word slip-ups which are so easy to make.
Are they what you expected, or are there others that you would have liked to be included?
Let me know in the comments – I may have to do a part two!
Here are some other resources to help you with spelling and punctuation problems.

When to use it’s and its
How do I use a semicolon?
Word choice dilemmas: round-up
Stationery or stationary?
What is an ellipsis?
Sneak peak or sneak peek?