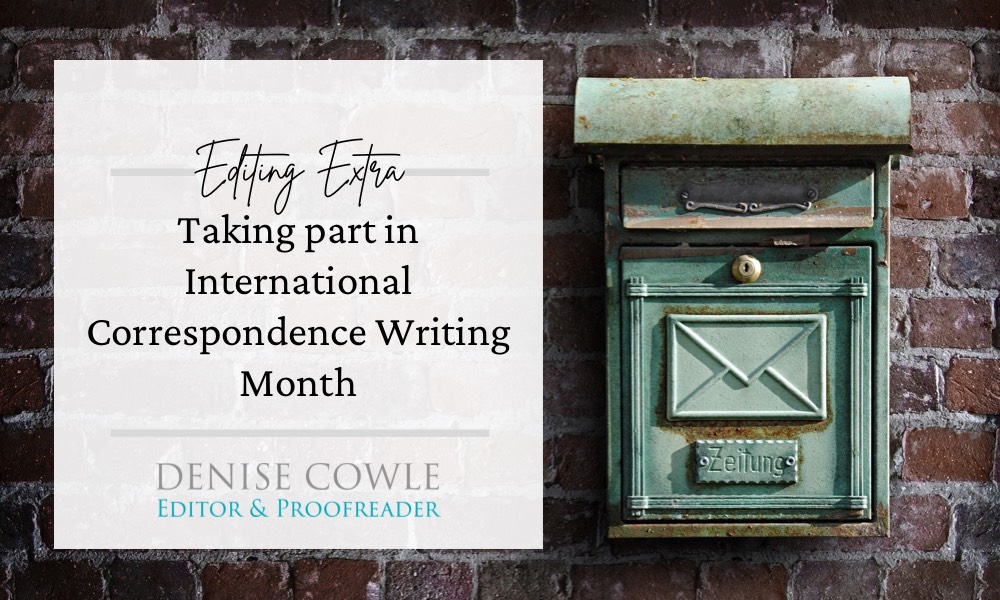 February has been a busy month. I’ve done a lot of writing, but it hasn’t been blog posts.
The last four weeks have seen me take part in International Correspondence Writing Month,  which runs in February each year.

The aim of InCoWriMo is to write and send one hand-written letter, card or note every day of the month. It appealed to me because:
There is also a pledge that you take (OK, this bit is a bit corny, but I think it’s a nice touch), which goes like this:
I, Denise, clearly see the benefits of InCoWriMo participation, not only to me personally, but also to those who will receive my correspondence. InCoWriMo is a beneficial endeavour and worthy of my full attention. I hereby pledge to hand-write and mail/deliver one letter, card, note or postcard every day during the month of February.

It’s years since I’ve put pen to paper for much more than random notes and lists. Sitting down to write a letter required stamina and used hand muscles that had pretty much given up on ever being asked to do anything again!​
I have always had pretty neat handwriting. But years of scrawling lecture notes, shopping lists and hurried reminders on Post-It notes had taken its toll, and I had to take time to sit down and write something that was legible.
Wherever possible, I also wanted my letters and cards to be more than just a quick hello. I wanted to send a message that was personal and came from the heart, and to take the opportunity to say something positive.
I wrote a list of potential recipients on my phone, and added to it as I thought of people throughout the month. This meant I could pick a name that I felt I wanted to write to each day, rather than have a rigid list to go through in order. Once I’d written the letter I made a note in my tracker.

What response did I get?

The response has been lovely. It seems that people REALLY appreciate it when you put aside some time for them, and they are delighted to get something unexpected through their letterbox!
I heard back from people via Facebook, Twitter, Slack, emails, postcards and letters. Everyone thought InCoWriMo was a great idea, and I suspect a few may even take the challenge next year!

What have I learned from this challenge?

Have you taken part in InCoWriMo, or a similar challenge, such as NaNoWrMo? What benefits did you get from it? I’d love to hear in the comments.
Didn’t hear from me? Perhaps I couldn’t find your address – some people don’t even list a correspondence address for their company that I could use. Who knows what you could be missing out on! If you’d like a letter or card from me, send your address in an email –  I promise I’ll write back!