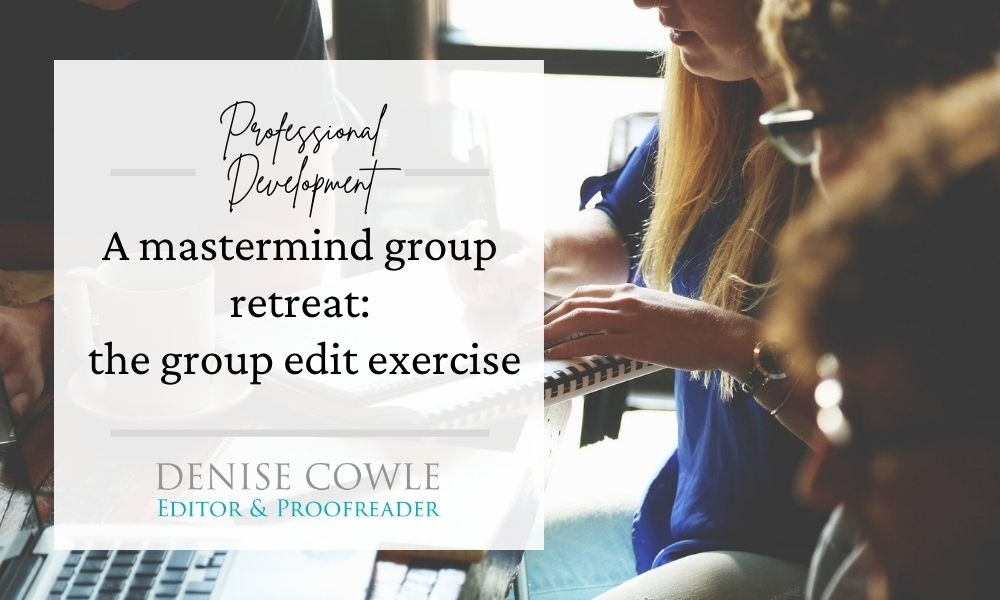 I think it’s fair to say that this was the session in my recent mastermind retreat that caused the most anxiety!
Having your work reviewed by an author or desk editor, or whoever commissioned you to edit or proofread, is a part of any job, of course.
But having other editors look at how you’ve edited? Wow! That’s opening yourself up to a whole different level of scrutiny and self-doubt!
At the planning stage of my retreat with six other editors, we brainstormed which areas we wanted to focus on. We all agreed that having our work looked at by others was an important exercise to include, and that it would be a safe and supportive environment to do so.
Related content: A mastermind group retreat: an overview

Our original plan was to have a single piece of text which we would each edit ‘live’, at the retreat. We would then review what we’d all done and discuss the similarities and differences in our edits.
One thing was for sure – this would have created plenty of discussion points, because no two editors will edit a text in the same way.

A better way for us

As we discussed the practicalities of doing a ‘live’ edit, we came to realise that, for us at least, it was putting too much pressure on ourselves.
Apart from the question of how long the piece would need to be to make the exercise meaningful, and whether we would have the time to accommodate it, there was the fundamental question of why we were doing it.
We wanted to look at the similarities and differences in our individual approaches to editing and learn from each other through examination and discussion of the edited text.
However, it soon emerged that a live edit wasn’t an ideal format for our group. There were concerns that the work we did – in what would essentially be a timed test – would not be a true reflection of how we approached our work or what we could actually do.
Some of us also had worries about exposing ourselves to direct comparisons with each other, as there are often many options when navigating the subtleties of editing. In a limited time how helpful would that be?
If you’ve ever visited an editors’ forum online, you’ll know just how detailed (or bogged down!) discussions can get over word usage and comma placement, and the outcome is usually that there is no consensus!
There was always the risk that would happen to us, and that, as a result, we wouldn’t achieve much in the time allocated.
And, honestly? We wanted to enjoy the weekend, and there was a real danger that worrying about this particular session would overshadow all the others.
That’s not to say that it would never be a suitable thing to do, just that at this stage of our group’s development it wasn’t the right thing for us.
Instead, we decided that each of us would provide an anonymised piece of edited work that we could discuss in more general terms as a group.

A cross-section of texts

Unintentionally, we each provided a very different type of text, which worked incredibly well because each piece generated a different discussion point.
I wish I could say we’d planned it that way!
The texts that we looked at were of the following types:
Educational textbook
When we discussed this piece, what was evident was that even though the sample was fairly short in terms of word count, the time needed to address the artwork and layout, and the volume of queries exchanged with the author, was considerable.
This was a good reminder to factor this time in when quoting for this type of work.
Technical writing
This piece made our eyes boggle! The sheer volume of abbreviations and technical terms was, on the face of it, a barrier to anyone without subject knowledge editing it.
However, as its editor explained, there was a comprehensive style sheet for her to follow, and the text was from a repeat client. Because of this regular work she understands their needs and style and can work through the texts quite quickly.
Working more efficiently by developing a more streamlined approach to the work may include, for example, using macros and customised style sheets in PerfectIt.
It was good to have confirmation that subject-specific knowledge isn’t always needed. It’s entirely possible to read a sentence and know that it’s not punctuated correctly, for example, without knowing what some of the words mean!
Blog post
This text was much more conversational in tone, which generated an interesting discussion about how much we intervene – what do we correct and what do we leave? We agreed that keeping the author’s tone of voice was essential with this type of text, and that we would be more forgiving of grammatical ‘errors’ and less rigid about some rules or style conventions.
It also highlighted that the audience is a major consideration when editing – who is going to be reading this and, in this case, will they care about a more informal style? The answer here is the general public, and probably not – its informality and chatty style will be far more appealing to them than some rigidly grammatical but lifeless prose!
Related content: Seven problems when starting a blog and how to solve them
Social sciences
These texts were heavily referenced so, unsurprisingly, the focus of our conversation was on how we would manage this.
We discussed checking references with software such as the now sadly unavailable ReferenceChecker (which still works if you already have it, but is no longer supported or available to buy), and the processes we use to check in-text citations and reference lists.
Related content: How to proofread your dissertation: 12 essential tips
General discussion
We also discussed our individual approaches to editing a piece of work:
• the order we do tasks in
• our use of clean-up macros at the pre-editing stage to do the routine tidying up before dealing with the language
• when and how we tackle references
• how we handle author queries
Conclusion
Although we had been quite apprehensive about sharing examples of our work with each other, we all agreed that it was an incredibly useful session.
It was less about ooh, I wouldn’t have put a comma there! and more about sharing our working practices. I think we were all relieved when our way of doing something was validated by another editor doing the same thing in the same way!
We all took away little nuggets of information to try out ourselves, whether that was a macro to experiment with (yes, some of us have yet to bite the macro bullet in any significant way!) or a slightly different approach to a common issue.
This session demonstrated that, even within a small group of editors, the variety in the work we edit is considerable, and each area requires different skills and a different focus.
What was also evident was the value of repeat work in getting to know a client’s needs and preferences, as well as understanding their style and quirks.
Would we willingly do it again? Definitely!

Are you a sole business owner or freelancer who has participated in a similar activity?
What was your experience?
I’d love to hear your ideas for exercises in a mastermind retreat.
If you’re not in a group, has this inspired you to start one? Let me know if it has!
And if you’re going to the SfEP annual conference at Wyboston Lakes in September, I’m running a session on setting up an accountability group. Let me know if I’ll see you there, and be sure to come and say hello if we haven’t already met!