Being a proofreader is not about being ‘a bit OCD’ 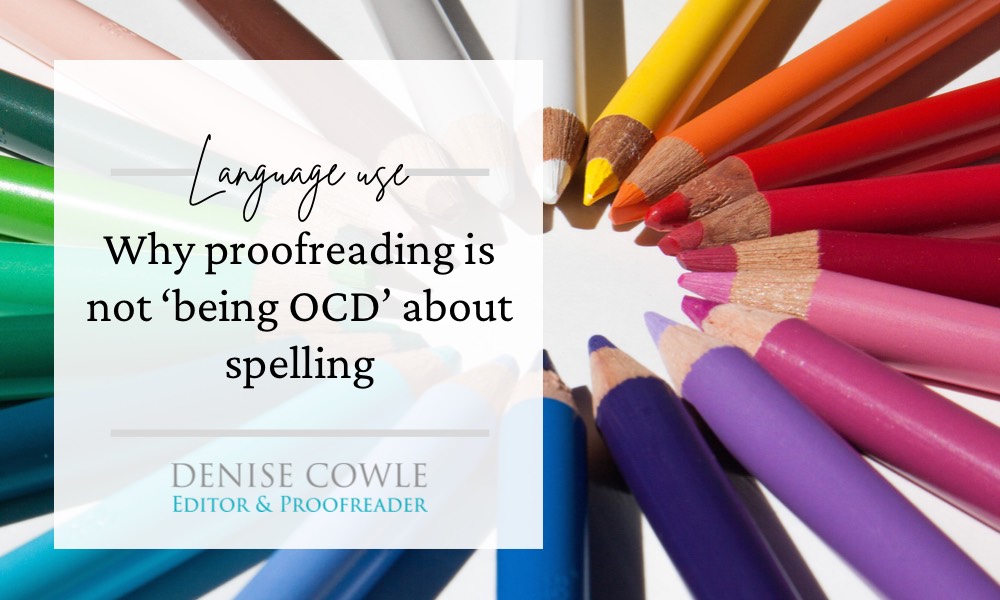 BEING PRECISE IS NOT OCD

There are plenty of qualities a proofreader or editor is praised for: Attention to detail. Precision. Thoroughness. Consistency. Order.
All positive traits, and all essential in a job that requires you to pick up the smallest of errors –​ italic commas where they should be roman, a word capitalised on page 4 that is lower case on page 168, making sure that chapter titles and page numbers match the table of contents. You get the picture.
It is our work. It is the pride we take in a job well done. We worry about whether or not we’ve missed a howler, some of us more than  others.
But it’s not OCD*.
If you prefer to have your bookshelves ordered alphabetically, or by colour, or by size, or you have to straighten a picture that’s hanging at three degrees off horizontal because it’s annoying you, then you’re organised and neat. That’s all.
Reluctant to hit ‘Send’ on the final pass of your latest editing job because you might not have caught everything, or publish your latest blog for fear of a rogue typo slipping through?
This is not OCD.
And you are not OCD. No-one is OCD, anyway, just as no-one is diabetes. Because OCD is an illness. Your tidy-minded nature does not mean you have OCD. Not even ‘a bit’. Just like you can’t be ‘a bit’ pregnant.
These are character traits – precision, order, neatness. And I get that we all sit somewhere on a continuum, from ‘couldn’t give a toss’ to ‘that’s really pissing me off’. The hyphen that should be an en dash might keep catching my eye until I do something about it, but my husband could read over it every day for a year and not notice.
But nowhere on that scale of character traits does it say ‘unbearable compulsion’, or ‘mental torment’.

OCD is turning the car around on the way to the airport (and risking missing your flight) so you can check yet again that the iron isn’t plugged in, even though you checked it was in the cupboard countless times before you left. Because if you don’t, the agonising, irrational fear that you might have burned your house down will torment you, ruining every second of your holiday.
Every. Waking. Second.
Just stop for a minute and try to imagine that. Is that you? Really?
You can’t switch off OCD. And even though your partner put that iron in the cupboard for you (again), you STILL have to check for yourself. Just one more time, again and again. And you certainly don’t boast about what it does to (or for) you.
OCD is checking and rechecking a file so many times that you miss your deadline, paralysed by acute anxiety and upsetting, irrational thoughts.
For example, it can make you believe – and I mean, really believe – that you’ve typed ‘this client is a fucking twat’ in 36 point Garamond somewhere in the document. Despite running repeated searches for the offending words and drawing a blank, you worry that the software is corrupted and isn’t picking them up. Or that while you were checking you accidentally typed them in the document again. And so you run another check. And another. And the cycle continues.
This is OCD. And you either have it or you don’t.

It’s faulty wiring in the brain, and it’s irrational. You can’t out-think it, or override it with logic or common sense. It isn’t called the doubting disorder for nothing. And it can, quite literally, ruin lives.
I don’t have OCD myself, but several people close to me have it to varying degrees. And by that I mean they have been diagnosed by a professional. They depend on lifelong medication to manage it. Funnily enough, they didn’t discover they had it by taking one of those freaking online ‘OCD tests’ that do the rounds on Facebook. Do NOT get me started on them.
This is how someone I know describes having OCD:
“relentless compulsions driven by panic or terror, being forced to endure irrational and unwanted thoughts, debilitating anguish, and a mental torment which I actually try to hide from others“
Does that sound anything like what happens when you’re about to send back a completed job, or publish your blog post? Probably not. If it does, my heart goes out to you, and I really hope you’re getting the help you need.
Someone I know, who works hard to manage his OCD every day, describes the obsessive thoughts as ‘lobsters’. A bit like Winston Churchill describing his depression as a ‘black dog’, but heavily influenced by an early 1980s Alexei Sayle sketch. They scuttle around his scattered mind like a hallucination, uninvited and undeterred.
His only coping mechanism, after many years of Cognitive Behavioural Therapy and anti-depressants, is to accept that they are there. He has to literally keep calm and carry on. On bad days, he cannot work at all and can be reduced to tears of despair and frustration. For him, these thoughts will never go away, severely affecting his mood and crushing his productivity. It can be utterly overwhelming. 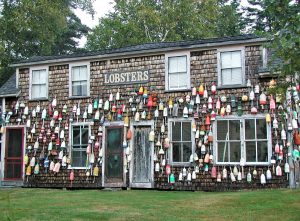 Nothing else is OCD.

Perhaps I’m spitting in the wind, railing against the inevitable shifts that happen in our language. Maybe the casual use of OCD to mean ‘meticulous’ or ‘exacting’ is simply going the way of words that no longer mean what they used to.
I can say that I’m proud to have a keen eye, be a bit pedantic by nature and take ridiculous pleasure in styling and formatting hundreds of references at a time (hyphens to en dashes – a joy to perform!). But you’ll never hear me describe my love of – and professional instinct for – proofreading as being ‘a bit OCD’.  That would be absurd and offensive.
In fact, it’s a line in too many scripts which we all need to correct.
So forgive me if I don’t smile when you make a throwaway comment about a greengrocer’s apostrophe ‘setting off your OCD’, or when you say that you’re ‘totally OCD’ about the serial comma, or cell alignment in tables.
It’s not a badge of honour, and I really can’t see the funny side.