The SfEP Scottish mini-conference: a summary 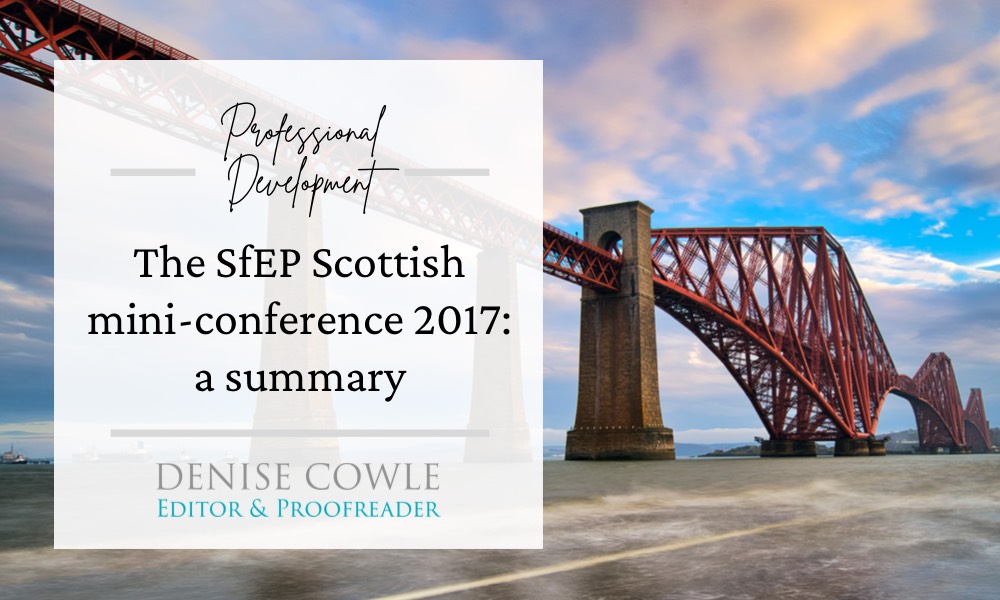 Yesterday I spent an enjoyable day in Edinburgh at the second Scottish mini-conference of the Society for Editors and Proofreaders (SfEP). The first was in 2014, when approximately 60 editors attended; this year we were in a bigger venue (the City of Edinburgh Methodist Church in Nicholson Square) and 90 of us, from Scotland and the north of England, were there.

History of the Scottish mini-conference

​The first conference grew from the two Scottish local groups (LGs) at the time (Glasgow and North/East Scotland) deciding to have a joint meeting. This idea grew arms and legs and, before we knew it (and with a lot of hard work behind the scenes), the mini-conference was born.
The speakers on the day were all local group members (with one exception), and they donated their time for free, as they would at a normal group meeting, allowing us to keep our costs very low.
It was very well-received by our many members who find it difficult to attend the annual SfEP conference because of financial, travel or time constraints. Anywhere is a long way when you live in the far north or the islands!
​One of the aims of that day was also to establish whether there was enough interest to restart the Edinburgh local group, which had been defunct for a number of years. It’s great to see that, three years on, the group has not only been resurrected, but is thriving.

This year – bigger and better!

This time around we were bigger and, I like to think, slicker. We used the ticketing site Eventbrite, which was very straightforward.  It worked extremely well, handling ticket purchases and refunds, and sending reminders to delegates. The fee that it takes (a percentage of each ticket which you can absorb into the overall ticket price) is well worth the peace of mind and huge time saving. Several delegates commented on how professional it looked and how simple the process was.

​We also secured two well-known key speakers for the day: Geoff Pullum, Professor of General Linguistics at the University of Edinburgh and blogger at Language Log and Lingua Franca, and Laura Poole, scholarly editor extraordinaire, trainer and co-owner of Copy-editing.com.
​As with the first conference, we also had a local group member speaking and several members of the SfEP council to update us on current issues.
We were welcomed by Sabine Citron, current Chair of the SfEP and member of the Glasgow LG, who spoke briefly of the history of the mini-conference. She wondered out loud why, despite the organisers of the first conference writing extensive guidelines on how to go about it, no other local groups had got together to put on their own event. Any ideas?
​He began by suggesting which reference books he thinks every copy-editor should have to hand (The Shorter Oxford English Dictionary, Merriam-Webster’s Dictionary of English Usage and The Chicago Manual of Style) and what books should, in his opinion, be burned! (including the revered-by-some Strunk and White’s The Elements of Style!) Grammar was up next, and he asserted how outdated most current books are, observing that, consequently, people are anxious and unclear about passives, prepositions, pronouns and the use of adverbs and adjectives.
‘Unsupported flaming nonsense’ about avoiding the passive voice and eliminating adjectives, from sources such as Strunk and White, George Orwell and The Publication Manual of the APA was given short shrift. Using extracts from a recent speech by Theresa May and the much-lauded, beautifully written ending of F. Scott Fitzgerald’s The Great Gatsby, he demonstrated how adjectives and adverbs are not just decorative, but are needed for sense and meaning.
Pullum’s advice to the sophisticated copy-editor: Ignore the advice of books on usage and writing when they tell you adjectives and adverbs are redundant and should be avoided. They have not looked at the statistics of normal prose or considered the implications of their advice.
He went on to address singular they  – which many (most?) editors already accept, and is now approved by many style guides including, recently, The Chicago Manual of Style – observing that it is increasingly treated by the young as the default when referring to an individual whose sex is unknowable or not at issue.
His advice to the sophisticated copy-editor: ‘They’ is fully acceptable as a neutral singular pronoun when referring to an arbitrary, generic, indeterminate individual.
Avoiding the split infinitive was up next for a take-down, with Pullum noting that this convention appears to have been started in the 1830s by ‘P’, an anonymous writer, for no good reason.
His advice to the sophisticated copy-editor: Don’t ever unsplit a ‘split infinitive’ if it makes sense. Great damage may be done to intelligibility as well as style.
Finally, he stamped on the idea that you can’t use hopefully to introduce a sentence, reminding us that adverbs don’t just modify verbs – they can also act as modal adjuncts to qualify the relation between the proposition and the truth. For example, ‘hopefully expresses that the truth of the proposition isn’t a certainty but merely a hoped-for outcome’.
His advice to the sophisticated copy-editor: Don’t ever imagine that there’s something wrong with ‘hopefully’ as a clause-introducing modal adjunct.
​Professor Pullum’s talk confirmed what many of us already think, but gave us the confidence and ammunition to use when challenged by those who are still bound by outdated conventions.

Some of the things that you could include in your application to upgrade are:
There was some audience discussion of the application process, including a comment that someone ‘couldn’t find the time as it would take so long to do’, although a recent upgrade to Advanced Professional Member felt it didn’t take too long – about a morning – and was much less painful than doing a tax return!
Another delegate observed that knowing what sort of information will be needed for upgrading would be useful at an early stage, perhaps when first joining, so that members could record it in a way that will make applying for an upgrade easier. Jane agreed that this was a useful point and would look at how the information could be given to new members.
​It’s worth remembering that with the new upgrade process you can’t stay at an entry-level or intermediate member forever – there are time limits at both levels – so it’s best to think about how you can work towards upgrading sooner rather than later.
At this point Stephen Cashmore, Training Director of the SfEP and member of the Glasgow LG, was to talk about the SfEP training courses, particularly the recently updated and expanded Proofreading and Copy-editing suites. Unfortunately he was let down by connectivity problems and wasn’t able to demonstrate the online courses as planned. You can learn more about these courses on the SfEP website.
​We then had a tea break when people had a chance to catch up with colleagues and meet new members. Having half an hour is the minimum time needed to get a drink and have a few different conversations, I reckon!

​She did a live demonstration (brave!) of how she uses these tools to do pre-editing clean-up tasks such as deleting multiple spaces and returns, changing hyphens to en-dashes in number ranges, and cleaning up ells used as ones and capital Os used as zeros.
​Ashley also demonstrated the function/shortcut keys that Editor’s Toolkit assigns and the toggle word and toggle character functions in Wordsnsync EditTools. One major function she uses Wordsnsync EditTools for is the journals dataset, which contains the correct title and short name of 16,000 journals. This tool will automatically check a reference list against the dataset, make corrections and highlight what has been checked and is correct, and what has been checked, found to be incorrect and changed.
She explained that this incredibly useful facility can save a lot of time, but can be a bit temperamental and doesn’t like you doing anything else while it’s working – not even moving the mouse! – so it’s best to go and make a cup of tea while it does its thing! This took a couple of minutes to run through a list of 30 references in the live demo, but Ashley says her desktop would run through the same list in about 30 seconds. Longer reference lists will obviously increase the time it takes.
​The lunch break saw plenty of editors relish the chance to catch some Scottish sunshine while they did some more catching up (For a supposedly shy bunch they don’t half talk a lot!)

The afternoon sessions were given over to Laura Poole, our guest speaker who had flown all the way from Durham, North Carolina (not to be confused with Durham, in the north-east of England where a couple of delegates had travelled from!).
We were entreated to own our skills and experience, and the words only and just were banned when talking about ourselves.

Laura’s final session, titled Taking charge of your freelance life: tools and techniques, was about finding balance, managing the dreaded feast or famine cycle, business practices and task management.
We spent some time looking at why, as freelancers, we fear not earning and so say yes to every opportunity we are offered. Drawing on her training as a life coach, and using her own real-life examples, she asked us to consider these questions each time we need to make a decision, rather than automatically saying yes:
​And also, remember that ‘No.’ is a complete sentence!
​It’s an interesting exercise that reminds you that there are consequences, good and bad, for every decision we make.
Looking at the feast or famine cycle, Laura suggests using the ‘3 Ds’ to triage your schedule when you are overcommitted – delete, defer, delegate – and to use downtime for self-care, business building and networking.
​There was plenty of interaction with the audience, as Laura encouraged us to share our experiences, and information was delivered with humour and plenty of personal insights to illustrate various points.
​Laura’s sessions were very insightful and practical, reminding us that we have skills we can develop to strengthen our position as freelancers, and that there is much we can do to take charge of our lives and stop feeling we are being controlled by our work.

The last segment of the day was given to Lucy Metzger, Vice-chair of SfEP and member of the Glasgow LG.

Who’s next for a mini-conference?

If you’ve got pangs of jealousy because we had such a great day up here in Scotland, why not organise your own mini-conference? It doesn’t have to be as big as this one – why not join up with another LG for a joint meeting and take it from there?
The SfEP have guidelines on setting up an event like this – it’s a fantastic alternative to the main SfEP conference for those who can’t make it. So go on – why not be the next mini-conference that everyone’s talking about?
If this event has left you pining for more editorial interaction, the next SfEP annual conference is 16–18 September 2017 at Wyboston Lakes, Bedfordshire. I hope I’ll see you there!