Why the grammar police aren’t cool 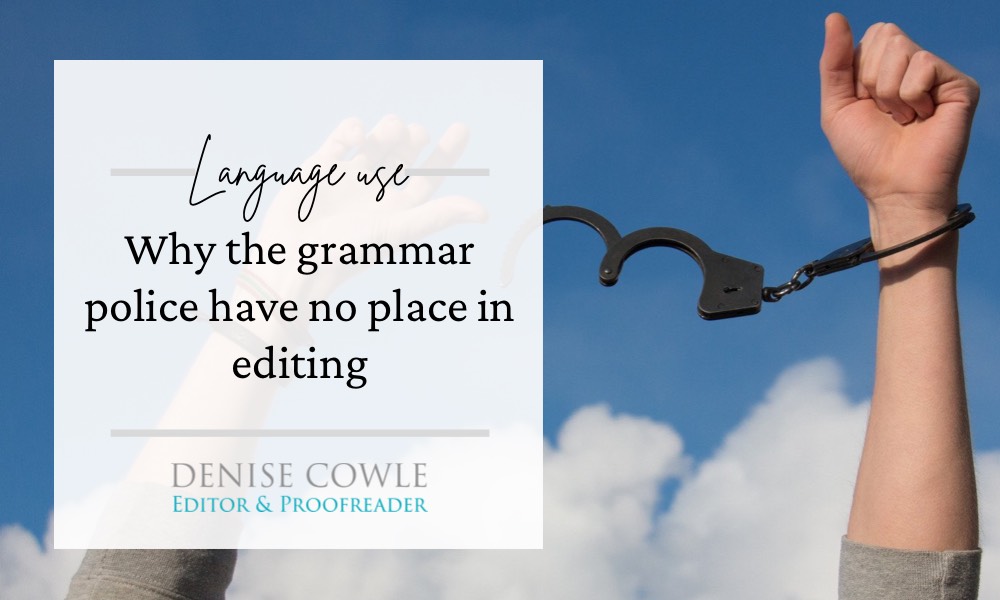 Good language use is all about sticking to the rules, right?

Wrong.
When I changed career and retrained as an editor, I was pretty confident about my abilities with grammar, and thought I had a good understanding of our language and how it works. I grew up in Scotland and was lucky to be taught a lot more about English language, its component parts and how it works than many have since my time at schools in Glasgow and Dundee in the 1970s and 1980s. So I was confident that I would make a good proofreader and editor.
In fact, I was probably over-confident.
The truth is, the more time I spent with colleagues who have many more years’ experience than me, and the more training I had, the more I realised that I was misguided or just plain wrong about many things.
Yes, I understood sentence structure, had excellent spelling abilities and a natural ability to improve and tighten people’s writing, but there were also many assumptions that I had about grammar and language use that were unfounded. It’s very humbling to realise that you don’t have as good a grasp of a subject as you thought.
This made me realise that I had probably been too quick to correct people, and that I hadn’t been as thoughtful and considered in my responses to ‘errors’ as I could have been.
Which brings me to the Grammar Police.

Who are the Grammar Police?

You know who I’m talking about. The keyboard warriors who take great delight in pouncing on anyone who dares to commit a so-called error of grammar or language use, and calling them out on it loudly and publicly. Those who, when out for something to eat, wield a red pen over the menu and triumphantly wave the corrected item under the waiter’s nose.
God forbid you should split an infinitive or end a sentence with a preposition on their watch. No quarter is given for the possibility that ‘fat fingers on a mobile phone screen while being jostled on public transport’ could be responsible for your typing stationary instead of stationery. Autocorrect doing its crazy thing? You should have noticed.
I think if you’d asked me five years ago whether I was a member of the Grammar Police I would have probably said ‘Yes! I like correcting language errors and I like making sure things are written “properly”.’
But now? Now I think that’s just not cool. That’s not what my job as an editor is about, and being a member of the Grammar Police is, quite frankly, misguided to say the least.
In my experience, the issues that get people exercised online are ‘rules’ that are outdated, or were never rules in the first place – they were style choices made by someone’s English teacher (or, more likely, their teacher’s teacher) which they have clung to in the face of changing usage.
These are known as zombie rules, and The Guardian wrote a useful article about them here. As a side note, I still tend to correct number 10 (changing try and to try to) if I’m editing academic writing or more formal papers, but I’d let it go if it was someone’s blog post. See? It’s all about the context and the author’s voice.
Language isn’t static, chiselled in stone for ever more – it changes. It’s a living thing, and that’s OK. We don’t write like Chaucer or Shakespeare anymore. We don’t speak like the BBC presenters of the 1950s. It’s called evolution.

So we need to educate ourselves – listen to how language is used, pay attention to how it is spoken and, more importantly, how it is being written. We need to remember that context is everything. We’re all capable of writing in different styles; do you use the same language and style in an email to your boss or client as you do in a Facebook post or a text message? Of course not – we adapt the formality and pay attention to accuracy depending on our target reader.
And we need to be kind.
If you’re lucky enough to have benefited from a good education, and you don’t have to wrestle with a learning difference such as dyslexia, be thankful and be gracious.
Let it go. Relax. There are fewer hard and fast rules than you realise, and there should be more important things to be doing in your life than calling out people’s errors in Facebook posts.
There’s nothing positive to be gained from correcting people unasked. You embarrass them and you risk coming across as a know-all. One study – which looked at the reaction of participants to emails with typos and errors of grammar and then gave them a personality test – found that participants with the most negative responses to grammar errors were less agreeable. Don’t let that be you.
If you see a really obvious error in someone’s blog post or web copy, send them a personal message. Let them know you enjoyed reading it, but you noticed this mistake (if you’re sure it is one!) and thought they might like to correct it. Job done, and no public embarrassment caused.
Has your writing ever been publicly corrected? If you don’t mind sharing, I’d love it if you would let me know in the comments – was it a simple typo, or was someone correcting an ‘error’ which was a style choice? How did it make you feel?
For my take on language and writing, and general musings on working for yourself, why not sign up to hear about updates to my blog?
As a thank you, you’ll get a copy of my free ebook, Creating Your Style Sheet, to help you be more consistent in your writing.