Women-only networking groups: for or against? 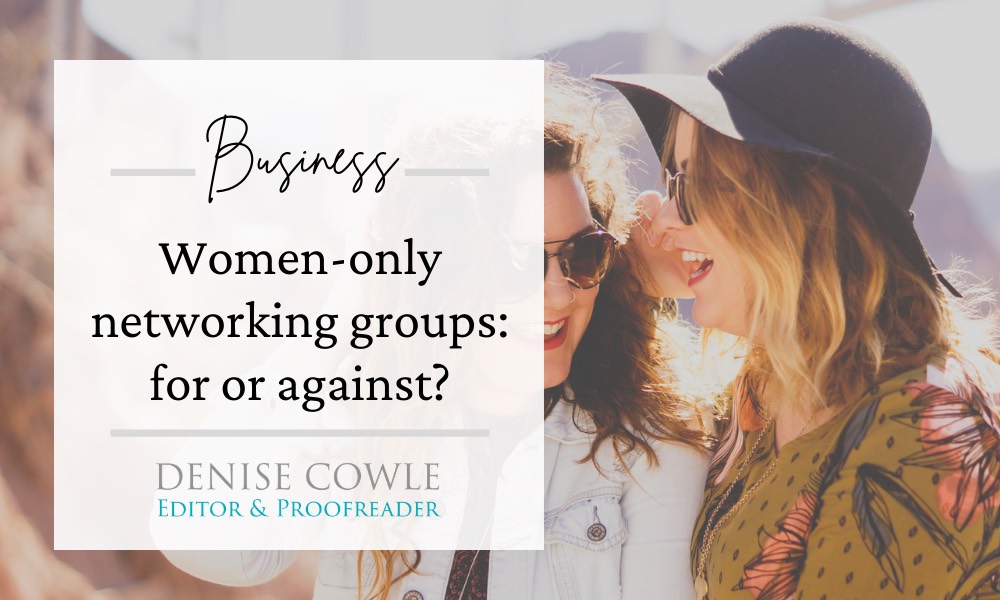 The fun side of networking

This afternoon I attended a very lovely event at Òran Mór here in Glasgow: the Scottish Women in Business (SWIB)  awards ceremony, ‘Celebrating Women in Business’. In the stunning surroundings of the auditorium, we were served afternoon tea, gin and tonic, and prosecco, and the winners were presented with awards recognising their achievements in the areas of communicating, connecting and collaborating.
I’m not a member of SWIB, but was invited to join one of vice-president Teresa Jackson’s tables. I don’t know about you, but I’m not a huge fan of walking into a room full of people I don’t know! So I was a little apprehensive about turning up and being a bit of a billy no-mates!
As luck would have it, the first person I bumped into was Teresa. Once I’d picked up my badge and my G&T (by the way, magnetic badges – genius! No more delicate fabrics ruined by huge safety pins!), she directed me to her table before heading off to attend to much more pressing things (Teresa project-managed the event).
I quickly got chatting to the other people at the table, one of whom I’d met at another event, and the worry about being a wallflower was no more! 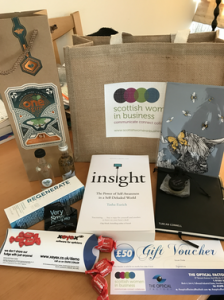 And this is the beauty of a good networking event – everyone was so interesting. And interested. People from diverse backgrounds and with wildly varying business interests gathering in one room to meet and chat, and, if possible, support each other’s businesses. And if these conversations go on to develop into business relationships, so much the better.
​My previous experience with networking groups was quite overwhelming, with close to 100 people there. People were friendly enough, but it was incredibly loud because of the numbers, and I didn’t feel able to have a proper conversation with anyone. I also felt there was a lot of talking at me and not much listening.
I know I’m not the only person in the world to have this experience, and I think it can really put people off – why go somewhere hot and noisy where you can’t chat comfortably, or where you are talked at for most of the time?
The interesting thing I heard from several people about the SWIB events is that they’re not overtly ‘salesy’; unfortunately some seemed to have had negative experiences with this at other networking events. As well as networking, SWIB also has events focused on training, and some which are purely social.
Which brings me to women-only groups and events.

There are mixed opinions on the need for and role of women-only groups such as SWIB. (And I must point out that SWIB does not ban men from joining, and there were some there today!)
As it turned out, most of the women at my table weren’t SWIB members, and as we chatted about whether or not we were planning on joining, some expressed reservations about joining a women-only group. What are the benefits of just networking with women? Is it limiting your options or narrowing your field? Is there a need for a women-only group?
I must admit, I’d never thought about this in any great detail before, and I hadn’t really considered that some women would be ambivalent about women-only groups.
I think the answer to whether there is a need is self-evident; if there wasn’t a need there wouldn’t be a thriving group. So enough women obviously want a gender-specific group, but I’m curious to know why.
I hadn’t actually considered that people would choose a women-only networking group to the exclusion of anything else. And I’m not sure that they do. Because we don’t operate our businesses in a women-only bubble, and of course we have to do business in a mixed environment, but clearly some women see an advantage in women-only groups.
I suspect that most women will also attend general networking events, but find there is a specific benefit to be had from women-only events that they don’t get elsewhere.
So I’m really interested to know why some women chose women-only groups or events.
In an article in the Irish Times in March 2017, Maura McAdam,  a professor of management and director of entrepreneurship, says:
​’What’s still an issue, and where all-female groups can be useful, is in helping women to own the role of entrepreneur,” she says. “Most men will happily introduce themselves as entrepreneurs; most women won’t. Yet their high levels of creativity, empathy and their problem-solving abilities mean they really get their heads around who their target market is and develop very successful businesses as a result.’

The case against women-only groups

​On the other hand, ​if you’re a women who wouldn’t choose to go to a women-only group or event, why is this?
In this Huffpost blog from 2015, the author puts forward the reasons she believes some women’s groups are actually failing business women: by offering too much ‘conversation, sharing and emotional support’ over ‘action, specific goals and practical support’. Of course this is one woman’s experience.

I’ve decided to join SWIB, because their events look interesting and I’d like to do more networking here in Glasgow. The people I’ve met are friendly and, crucially, there is the potential for me to create new business relationships. The fact that it’s a women-only group isn’t the prime mover for me – the fact that I’ve met interesting people at the two SWIB events I’ve attended is.
So I’m looking forward to my next SWIB event, to having conversations with more interesting people, giving them the benefit of my network, and perhaps doing business with some of them. And, for me, the fact that they just happen to be women is pretty far down my list of things to think about.

I’m genuinely interested to hear both sides of this conversation. Please feel free to answer any of the questions I’ve posed here, or to give me your experiences of networking groups, good and bad, in the comments below.