Worry-free writing: how to use hyphens and dashes 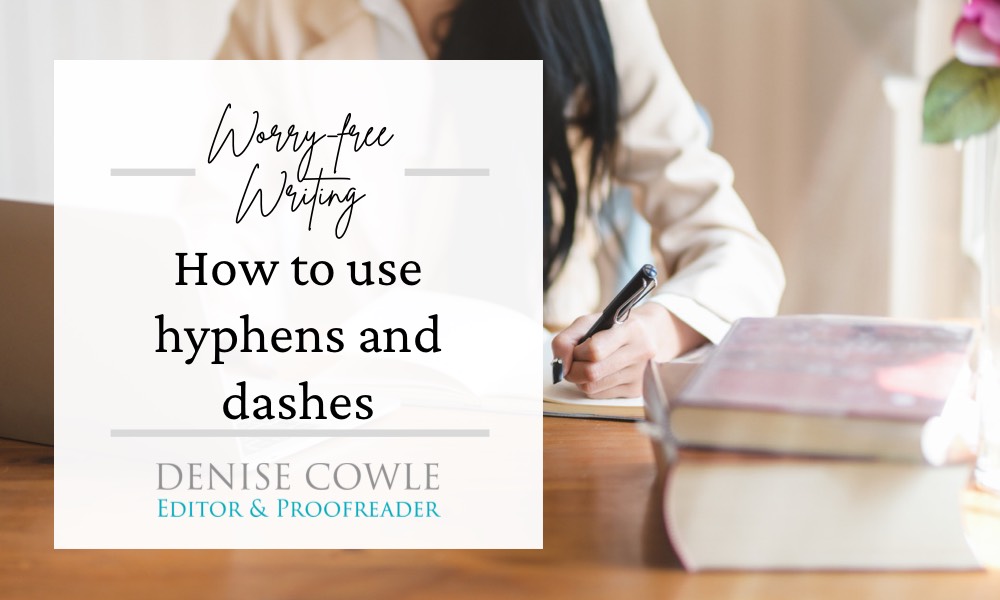 There is more to using hyphens and dashes than you might at first think. In this post I’m going to take a look at:

What’s the difference between a hyphen and a dash?

Good question – did you even know there was a difference between a hyphen and a dash? Or that there are two different types of dash?

Hyphens and dashes are distinct characters on your keyboard and they have separate jobs.

They are also different widths, although depending on the typeface you are using that may not always be really obvious.

What is a hyphen?

OK, indulge me here for the sake of completeness. I know you know what a hyphen is, but let’s just do a spot of revision here!

A hyphen is a horizontal line that is used to join two wods, or parts of words, together. For example, well-known, co-ordinate or fat-free.

Using a hyphen can be a matter of preference. I used co-ordinate as an example above, but some style guides I word with prefer it to be closed up, without a hyphen: coordinate.

Whichever style you prefer, make sure you use it consistently, including in different forms of the word. In this example that would mean you’d use coordinate, coordination and coordinator, and not introduce the hyphen in some forms but not others.

How do I make a hyphen?

When do I use a hyphen?

A hyphen can be used to join a prefix to a word and in compound words.

1 Using a hyphen to join a prefix to a word

A hyphen is used to join a prefix, such as re, de, anti or non, to a word to change its meaning: re-apply, de-ice, anti-clockwise, non-negotiable.

It’s worth remembering that, generally, the trend is for prefixes to lose their hyphens, except where it would be confusing.

This is why most people will now write email rather than e-mail (or electronic mail!), but for clarity we would still write re-apply rather than reapply, and re-refer rather than rerefer.

2 Using a hyphen in a compound word

A hyphen is also used in compound words – adjectives such as well-known, part -time or dark-blue – that are used to describe, or modify, a noun: a well-known speaker, a part-time worker; a dark-blue uniform.

We don’t need to go into all the ins and outs of using compound words here, but it’s worth noting that when the modifier comes after the noun its describing you don’t use a hyphen: the speaker is well known; he works part time; the uniform is dark blue.

However, you may find some style guides ask for the hyphen to be used both before and after the noun, so as with so many things, it depends!

If you’re interested in learning more about this, I recommend The Penguin Guide to Punctuation – an excellent, easy-to-read book.

What is a dash?

There are two types of dash:

How to make an en dash

The quickest way to make an en dash on a PC is to use the inbuilt keyboard shortcut:

This won’t work using the hyphen key – you’ll probably just succeed in shrinking the text size on your screen!

If you’re working on a platform that doesn’t support these shortcuts (for example on WordPress, where I’m writing this blog, or on social media) you can also use the alt key code:

How to make an em dash

To make an em dash on a PC, use the keyboard shortcut:

CTRL +ALT + the minus sign on the numeric keypad

Again, if your platform doesn’t support shortcuts you can use the alt key code:

If you don’t have a numeric keypad, you can use the ‘insert symbol’ command in Word:

You can see from the screenshot that as well as the en dash and em dash there are other useful characters, such as the ellipsis, and you can also see the assigned shortcut key for each.

Inserting a dash on a Mac

If you’re a Mac user, the keyboard shortcuts are:

OK, so you’ve got your dashes, but what do you do with them now?

When to use an en dash

​In British English, an en dash is commonly used:

1. Using an en dash between elements in a range

Here the dash represents to or and:

When used in a range, the en dash is always closed, which means there is no space either side of it.

2. A pair of en dashes can be used to set off additional information

We can use two en dashes to enclose extra informations or an interruption in a sentence.

This is called parenthetical use. It works in the same way as a pair of commas or parentheses do in a sentence. Parentheses (plural; the singular is parenthesis) is another word for brackets.

Our parent company – which was founded in 1955 – is based in San Francisco.

If the additional information comes at the end of the sentence, only the first dash is used:   ​

Visit our show area to see our huge range of sheds – you won’t be disappointed!

When used to set off information, the en dash is always open, which means there is a space on either side of it.

The important point to note is that if you remove the information inside the parenthetical dashes, what is left will still make a complete, grammatrically correct, sentence.

When to use an em dash

The em dash is is used much less often in British English (although it is dictated by the Oxford style guide), but it is the norm in American English, where it is used parenthetically.

In this use, the em dash is closed – there is no space between it and the words either side.

Our parent company— which was founded in 1955— is based in San Francisco.

The em dash is also used in dialogue to indicate interrupted speech:

‘They couldn’t hit an elephant at this dist—’

Does it matter whether I use a hyphen or a dash?

You might wonder if the distinction between a hyphen and a dash really matters. Does it make any difference?

Well, the world won’t end if you carry on using hyphens for everything, that’s for sure.

But I think a correctly used en dash improves your writing; it creates space and makes the text easier to read.

I always get a twinge of disappointment when I see a hyphen where an en dash should be. And, of course, I never fail to be pleased by someone using an en dash!

This isn’t snobbery, or a case of ‘I know how to use them and you don’t’.   Before I trained as an editor I had no idea about these differences. We were certainly never taught about them at school.

But now I do know, and I understand how a text is improved by using hyphens and dashes correctly, I want to teach the world, one person (and one correctly paced en dash) at a time!

And now you know about them, why wouldn’t you use them too? Have the satisfaction of knowing that not only is your text easier to read, it also looks more polished.

You’ll prompt an approving nod of recognition from all the other en dash users out there. Who knows, it could be the tipping point that shifts them from prospects to customers!

What do you think? Do we editors get too worried about subtle differences like this, or do you see their value?

If this is all new information to you, do you think you’ll make an effort to use hyphens and en dashes in the right place now, or is it really not that important to you?

I’d love to hear your thoughts on this and any suggestions you might have for other topics to include in my Worry-free Writing series.

If there’s a word you have trouble remembering how to spell correctly, or a grammar point you’re not clear on, or a punctuation mark you’re not sure about, drop me a line, or tweet me using the hashtag #WorryFreeWriting.

And to get my monthly newsletter about my latest blogs, podcast episodes or other resources, be sure to sign up for The Editor’s Note below.