Worry-free writing: how to use apostrophes 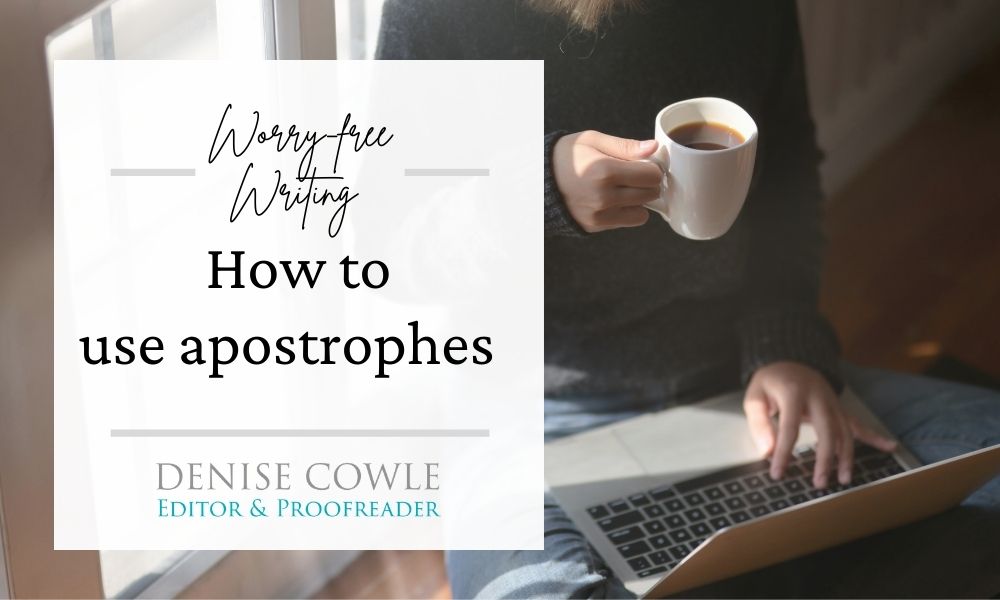 Why are apostrophes such a problem?

If there’s one thing that’s guaranteed to enrage the Grammar Police (who, by the way, are definitely not cool), it’s people who, for whatever reason, don’t know how to use apostrophes correctly.
We really do seem to have a big problem with them – whether they’re missed out or put in where they have no business being, lots of people just can’t seem to get it right. For them, how to use apostrophes is the punctuation equivalent of pin the tail on the donkey – a matter of luck more than judgement whether they hit the mark!
I think apostrophes are a problem for lots of people because:

What is an apostrophe used for?

Generally, there are only two main reasons for an apostrophe’s existence. That’s right, two. And if you can get those two reasons clear in your mind then you’ve a much higher chance of using one correctly.
1 In contractions, to show that a letter has been left out.
2 To show possession, i.e. that something belongs to someone.

How do I use an apostrophe in contractions?

Here the apostrophe is used to show that one or more letters has been left out when combining two words:
So far, so straightforward, yes?
Just be sure to note that the apostrophe goes where the missing letter is. You should never write is’nt or Iv’e.

How do I use an apostrophe to show possession?

So this is where things start to get a bit more complicated!
Let’s start with the straightforward bit.
We use an apostrophe + s to show that something belongs to someone or something:
I think most people are OK with this. But what if the word already ends in s?
Most punctuation guides will now go with the ‘if you say it then write it’ rule.
Leaving off the s is pretty much a matter of style in this context these days – some publications stipulate their preference in their style guide.
My friend Ross is positively affronted if you write Ross’ and leave off that second s. So be warned – some people feel strongly about this one!
However, when the end of the word is pronounced iz or ez, you can safely leave off that second s.

There is never an apostrophe in a possessive pronoun!

This goes for all the possessive pronouns that end in s:
And I really hope you wouldn’t try to shoehorn an apostrophe into his!
(The difficulty people have in using its and it’s correctly is such a hot potato that I wrote a blog about it.)
​So you would write:
I get that this must seem illogical and confusing, but I’m afraid there’s no way around it – you just have to accept that there are lots of these inconsistencies in our language and try to do the right thing!

When can I leave out an apostrophe?

Short answer? In plurals.
When there is more than one of something, you don’t need an apostrophe – the plural ending is quite enough, whether that’s –s, –es, or –ies.
See? Not an apostrophe in sight!
But … but … what about possessive plurals? Ooh, meltdown alert! Don’t be tempted to just give up at this point, though. You can work it out!

A plural never takes an apostrophe, but when you want to show that something belongs to that plural, then here comes that apostrophe, just to muddy the waters!
If you want to show that a plural is possessive, and it already ends in s, then you only need to add an apostrophe after the s:
And when you have a plural which is irregular (you haven’t simply added s to make it plural), you add ‘s just like any other possessive:

Is there an exception to not using an apostrophe in plurals?

Of course! This is English –​ we have exceptions for everything!
If not adding an apostrophe would make your plural unreadable or confusing, then it’s OK to add an apostrophe.
This is why you might see:
There is no agreement on this approach, but Grammar Girl gives some nicely pragmatic advice about it:
‘Unless your editor wishes otherwise, if you write books, spell it dos and don’ts; and if you write for newspapers, magazines, or the Web, spell it do’s and don’ts. If you’re writing for yourself, spell it any way you want.’

Phew, I think we got there!

I hope this has helped you to understand when you should and shouldn’t use an apostrophe. I don’t expect you to have had a Eureka! moment (if you did, I really want to hear about it!), but I hope I’ve shone some light on what, for many people, is a very fuzzy area.
A very useful reference book is The Penguin Guide to Punctuation, which I recommend to my clients.

What do you think? Has that helped you get a better picture of when to use an apostrophe?
I’d love to hear your thoughts on this and any suggestions you might have for other topics to include in my Worry-free Writing series.
If there’s a grammar point you’re not clear on, or a punctuation mark you’re not sure about, drop me a line, or tweet me using the hashtag #WorryFreeWriting.