Worry-free Writing: how to use a semicolon 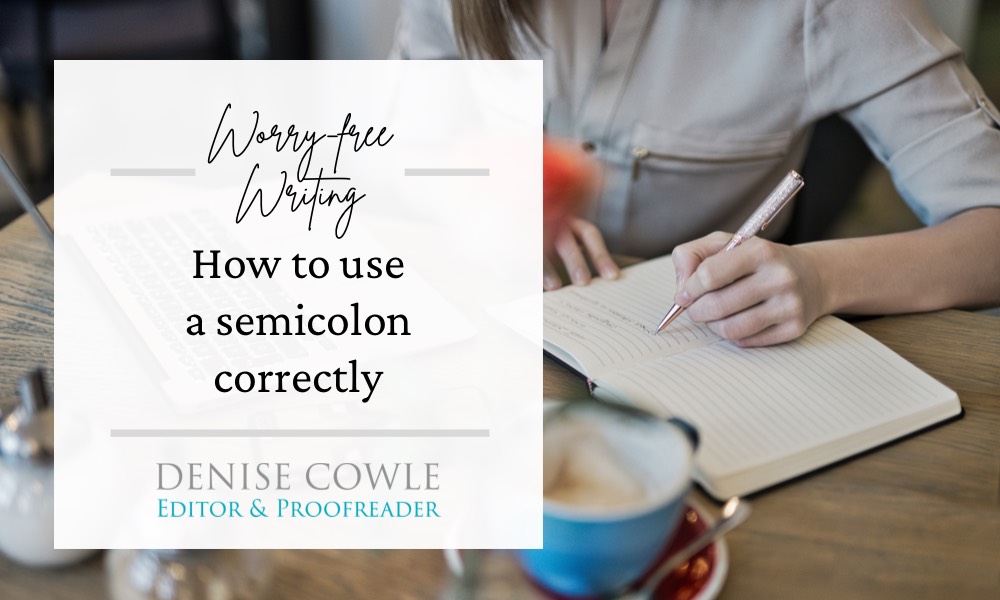 How do I use a semicolon?

Lots of people are not sure of how to use a semicolon and are bit scared of it, so they just avoid it altogether! But it’s a really handy punctuation mark and using it is more straightforward than you think, so let me demystify it for you!

Let’s take a quick rundown of the rules for using a semicolon –​ there are only two that you need to learn, so this won’t take long.

If you’d rather watch the video version of this blog, you can click on the image below.

What is a semicolon for?

Now, if you’re saying to yourself Help! When should I use a semicolon?, the first thing to know is that a semicolon really has only two functions in a sentence.

It is used to show that although the sections (or clauses) are separate they have a connection. It can also be used when you want to further explain or expand on the statement in the first clause.

​It’s OK to use a semicolon when:

Using a comma instead of a semicolon in this instance would be considered incorrect; this is known as a comma splice. (See what I did there?)

Comma splices are sometimes allowed in fiction writing, where we can be a bit more lenient with grammar rules, but they are generally​ a no-no.

This is especially common when it could be confusing to use commas to separate the items, for example with a long list or when the list items themselves include commas.

Notice that the list is introduced by a colon, and you mustn’t forget to use a semicolon before the final and.

And that’s all there is to it!

It really is that straightforward – there are only ever two reasons to use the semicolon.

​I hope that’s cleared things up for you!

Worry-free Writing: how to use ‘ranging from’ correctly

Worry-free Writing: how to use apostrophes

Worry-free writing: how to use hyphens and dashes

What do you think? Has that helped you get a better picture of how to use a semicolon?

I’d love to hear your thoughts on this and any suggestions you might have for other topics to include in my Worry-free Writing series.

If there’s a grammar point you’re not clear on, or a punctuation mark you’re not sure about, drop me a line or tweet me using the hashtag #WorryFreeWriting.

And don’t forget to sign up for The Editor’s Note below, to keep up to date with new blogs and resources from me.